Driving through Dubai is like leafing through The Guinness Book of World Records. The biggest shopping mall, the biggest dancing fountain, the biggest indoor ski slopes; if it ain’t larger than life, you’re probably not in Dubai. We decided to shoot for the stars: Burj Khalifa, the tallest building in the world.

A few thousand years ago you had to go to Giza, Egypt, to find the tallest manmade structure. The Great Pyramid was about 140 metres high
and held the world record for over 4,000 years. In 1889 however, Gustav Eiffel designed his iconic tower for the 1889 Paris World Fair, the first
structure to exceed 300 metres. But the ooh-la-las would not last long, because in the 1930s New York was gearing up for another whopper: the
Empire State Building stacks more than 100 floors up to 400+ metres, a considerable feat that even King Kong could not ignore. Another 40 years
later the ball was in Asia’s court, as the Taipei 101 shattered New York’s record with its ballsy 500 metres of towering glass and concrete. 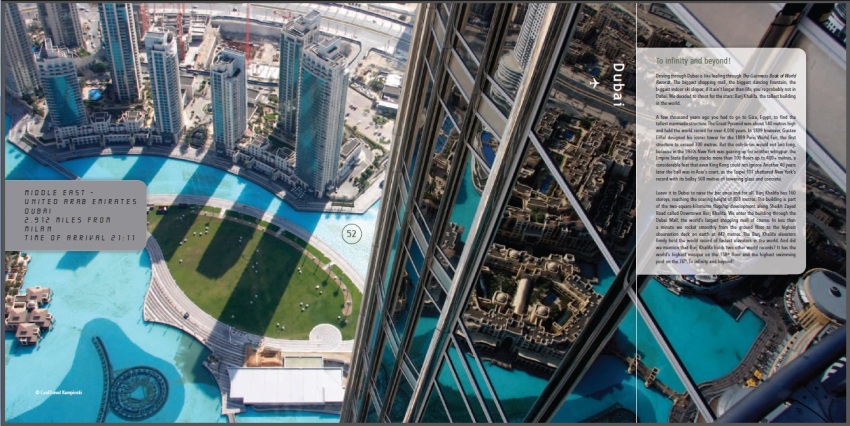 Leave it to Dubai to raise the bar once and for all. Burj Khalifa has 160 storeys, reaching the soaring height of 828 metres. The building is part
of the two-square-kilometre flagship development along Sheikh Zayed Road called Downtown Burj Khalifa. We enter the building through the
Dubai Mall, the world’s largest shopping mall of course. In less than a minute we rocket smoothly from the ground floor to the highest
observation deck on earth at 442 metres. The Burj Khalifa elevators firmly hold the world record of fastest elevators in the world. And did
we mention that Burj Khalifa holds two other world records? It has the world’s highest mosque on the 158th floor and the highest swimming
pool on the 76th. To infinity and beyond!

Anouk Pappers – Author ‘Around the World in 80 Brands’